We are the primary professional association for the teachers of French in the state of North Carolina. Our primary goal is to represent the French language and culture in North America and to encourage the dissemination, both in the schools and in the general public, of knowledge concerning all aspects of the civilization of France and the French-speaking world. You can contact us at any time by sending us a message at ncfrenchteachers@gmail.com.

﻿
.We are the primary professional association for the teachers of French in the state of North Carolina.  Our primary goal is to represent the French language and culture in North America and to encourage the dissemination, both in the schools and in the general public, of knowledge concerning all aspects of the civilization of France and the French-speaking world.
You can contact us at any time by sending us a message at ncfrenchteachers@gmail.com.

Want to receive our emails? Check out the most recent one HERE and click "Subscribe" at the top.

Meet the members of our Executive Committee 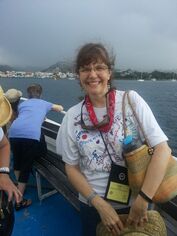 Dawn Young A language teacher veteran beginning her twenty-fourth year of teaching, Dawn Young currently teaches at South Mecklenburg High School in Charlotte, NC. With a passion for cross-cultural connections, Dawn has accompanied both middle and high school student groups on homestay trips throughout France, as well as facilitating the hosting of students from France among her school community.  During her teaching career, she has also organized several immersion day camps, and loves coordinating similar learning experiences with other teachers.  Most recently, Dawn represented North Carolina as part of a delegation of teachers at the 2018 American Association of Teachers of French (AATF) Annual Convention in La Pointe-du-Bout, Martinique, and looks forward to serving NC-AATF over the next several years as a member of the leadership team in the capacity of Présidente. 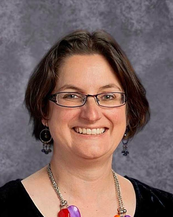 Lisa Bartels feels blessed to be paid to have fun: teaching is her calling, her hobby, and her passion!  For 18 years Lisa has taught in public and international schools on three continents.  She holds a M.Ed. in Curriculum and Instruction and is a National Board Certified Teacher.  Lisa’s professional accomplishments include: teaching grades 7-12 in Cameroon, Africa with SIL International, serving as the Education Coordinator for families homeschooling in remote African villages, teaching French (and English AND Spanish) at Faith International Academy in the Philippines, building the Fuquay-Varina HS French program to include level 4 and AP classes, and advocating for her community of learners through curriculum writing, grant writing, serving on AdvancEd review teams, instructional coaching, and presenting at professional workshops. When Lisa is not teaching, she is usually developing curriculum!  She is also active in her church and enjoys camping and jet skiing with her husband and four children. Lisa serves as the Vice-Présidente de NC-AATF. 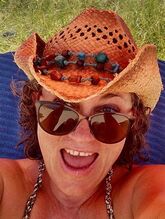 Heather Tedder was born in Wilkesboro, NC. She earned her undergraduate degrees in French and English at NC State, then went on to earn an MA in French at Vanderbilt University in Nashville, TN and PhD coursework at Louisiana State University in Baton Rouge. She became the French teacher at Watauga High School in 2007 and earned National Board Certification in World Languages (French K-12) in 2011. She has studied in Lille, France (1998), Liège, Belgium (2004) and Quebec City, Quebec (2009) and wants to go to West Africa next! She worked in Nice for two summers as a teacher and program coordinator with Abbey Road Educational Travel. She traveled with students to Quebec the summer of 2014, to France and Spain in 2016, and was honored to serve as an 2018 AATF Future Leader at the National Convention in La Pointe-du-Bout, Martinique. Heather has also presented on various topics at FLANC, such as food in the classroom, communicative activities in the classroom, Louis XIV and the 17th century, and the use of comics in upper-level classes. Heather is currently NC-AATF Past-Présidente 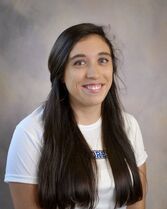 Caroline May Hocutt recently completed her third year of teaching at Mooresville High School. At her school, she is a sponsor of American Sign Language Club, French Club, as well as the school's chapter of La Société Honoraire de Français. When not at work, Caroline enjoys gardening, cooking, and exploring francophone arts and media. She spends her summers supporting students as they navigate an immersive learning experience in Rennes, France. Caroline is currently NC-AATF secretary.

Sandrine Hope grew up in the Savoie region in France. She has been in the US since 1992. She started as an Au Pair in Alabama, and remained in Alabama until June 2019 when she relocated to South Carolina. She never pictured herself as a teacher when dreaming of her future, but teaching French has become one of her life passions. She has taught at various levels, including elementary, middle, high school and mostly university. She has been fortunate to teach at the University of Alabama (UA), Samford University, the University of Alabama at Birmingham (UAB), and currently at Davidson College.
In addition to teaching, Sandrine enjoys meeting colleagues at conferences, doing pottery, playing with her various pets, and most of all spending time with her family.
Roll Tide! Vive la France! Sandrine serves as Trésoriaire of the North Carolina chapter of AATF. ​ 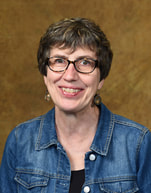 Carole Kruger received her BA and MA degrees in French from the University of North Carolina at Greensboro.  She holds a PhD from Duke University, where she specialized in 19th century French literature.  Since arriving at Davidson College in the late 1980s, she has taught all levels of French language and literature.  Thanks to a Faculty Enrichment Grant from the Canadian government in 2005, she also teaches a course on Quebec literature, society, and culture.  Carole’s commitment to undergraduate learning abroad runs deep, as witnessed by her multiple stints as Resident Director of the Davidson in France program (Montpellier, Paris, Tours).  She is currently Chair of the French and Francophone Studies Department at Davidson College. Carole currently serves as Liaison with Higher Education..

Jeff Pageau currently serves as a board member for both the NC-AATF and FLANC.  He teaches French for Nash-Rocky Mount Schools (Rocky Mount High School).  In his free time, he volunteers as a local liaison for the American Field Service (AFS) supporting exchange students and host families.  He enjoys spending his summer working abroad for a high school language and culture immersion program. Jeff is the NC-AATF Advocacy Coordinator.

Katharine Garner begins her 30th year of teaching French in North Carolina. She has taught K-6 exploratory French, French I-IV, AP French Literature as well as Pre-IB French. She began her career in Creswell teaching FLES for K-6 as well as high school French I and II. From there she moved to Currituck and taught nine years, French I-IV and AP French Literature. After meeting her husband, she moved to Rocky Mount and spent 14 years teaching World History, SAT Prep, Freshmen Transitions and French I-IV at Southern Nash High School. Due to budget cuts, she was moved to Rocky Mount High School where she currently teach levels 1 and 2. She graduated from ECU with a BS in French education and later returned to ECU to complete her Master's Degree in School Counseling. She was a counselor for 5 years and then a testing coordinator and Beginning Teacher coordinator where she completed peer evaluations for 20 Initially Licensed Teachers. She was blessed with supervising a student teacher in 2012-2013 and again in 2016-2017. I have loved every minute of this amazing ride and look forward to more opportunities to help others in the future. Kathy serves as the NC-AATF Mentoring Coordinator. 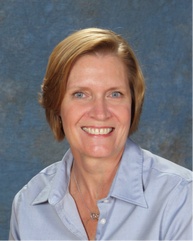 Prior to attending college, Sue Brown was an au pair with a French family, near the city of Le Mans, France.  During the summer before college, she traveled throughout Europe with a Eurail Pass while staying in youth hostels.  Sue graduated from the University of Wisconsin Milwaukee with a double major in French and Accounting.  After graduation, she worked as a CPA (certified public accountant) and a PHR (Professional in Human Resources) for almost 15 years.  When she left public accounting in 2001, Sue returned to her passion, and began teaching French at Gaston Day School.  She has been serving as the Chair of the World Languages Department at Gaston Day since 2006. Sue has been the NC administrator for the Grand Concours since 2016. . 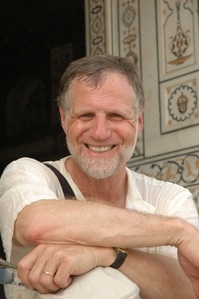 Alan Singerman (A.B. Ohio University 1964, M.A., Ph.D. Indiana University 1966, 1970), Richardson Professor Emeritus of French at Davidson College, taught French language, literature, civilization, and film, as well as semiotics, at Davidson from1982 to 2007, after ten years at the University of Maine (Orono). He has studied in Paris, Strasbourg, Freiburg (Germany), and Montpellier, where he received a Masters degree in film studies in 1985. He directed study abroad programs in Pau, Rennes, and Montpellier before setting up and directing Davidson's new program in Paris and Tours during the 1995-96 year. He created the Davidson College French Summer Institute for secondary school French teachers in 1992 and directed ten Summer Institutes, the last one in 2010. He has been an active member of the NC chapter of the AATF, serving terms as President, Vice-President, Secretary-Treasurer, and Webmaster. He currently serves as Administrator of the John Philip Couch Scholarships for study in France. His scholarly interests focus on the 18th-century French novel and French cinema. His publications include a monograph on the novels of the Abbé Prévost, L'Abbé Prévost: l'amour et la morale (1987), a critical edition of Prévost's 1741 novel, Histoire d'une Grecque moderne (1990), an edition of articles on language and culture, Toward A New Integration of Language and Culture (1988), an edition of guidelines for measuring competence in French culture, Acquiring Cross-Cultural Competence: Four Stages For Students of French (1996), a textbook on French cinema, Apprentissage du cinéma français. Livre de l’étudiant (2004) and its counterpart in English (2005), as well as articles on French literature and film. His most recent publication is a translation into English and critical edition of Prévost’s Histoire d’une Grecque moderne (The Greek Girl’s Story, 2014). Alan currently serves as the Advisor for the Couch Scholarship.

Jean Davis teaches French ​in Huntersville at Lake Norman Charter High School. She and her husband are emptynesters and love to spend time together travelling and spending their free time serving others. She has two grown sons who are graduates of NC State University and Western Carolina University. Both live in Raleigh. She enjoys doing triathlons and taking students abroad every other year. Last year she had the privilege to visit the  Côte d'Ivoire and fell in love with French-speaking Africa, as this was her first visit there. She currently serves as the Webmaster.